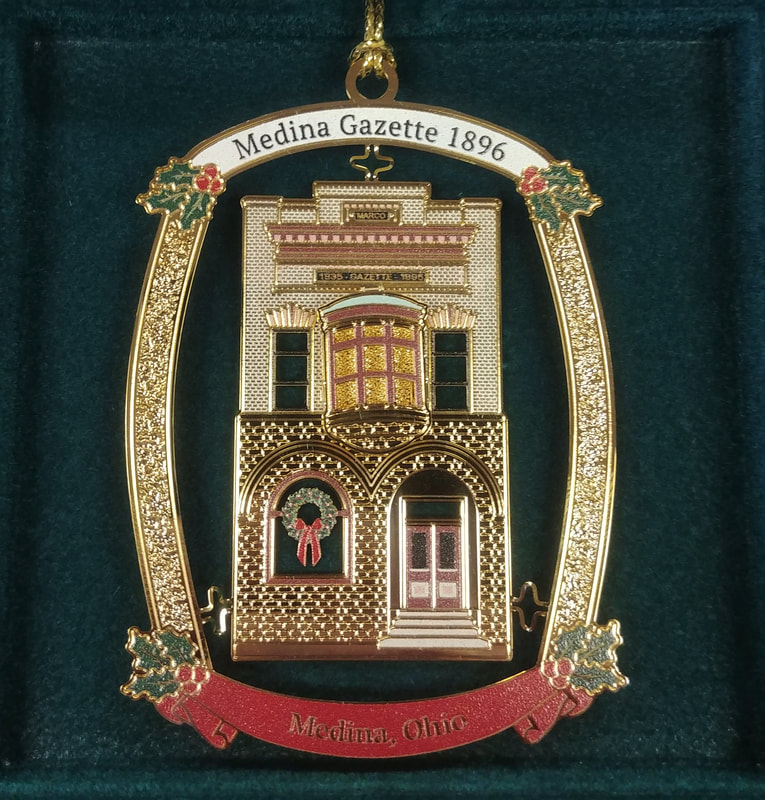 One of the last of the new buildings constructed in the post-great fire era was the Gazette building at 52 Public Square. It was home to Medina County’s oldest newspaper. The paper, founded in 1832, has been published continuously under the Gazette name since 1848.

The building’s architectural style is Richardsonian Romanesque, and it was designed and constructed by the Gruninger Brothers Company. It appears the building was dedicated in 1896. The name “Neil” originally appeared in the upper façade name box as Charles Neil was the paper’s publisher at the time.

​The Franklin Sylvester Library, 210 S. Broadway Street
Medina’s first library was created in 1877 by the Medina Library Association. The collection was funded by memberships of $1.00/year and Association fundraisers. The books were housed in Miss Meora Andrews’ jewelry store at 8 Public Square, as the Association had no building of its own.

Around 1900, Judge A. R. Webber suggested to wealthy cattleman Franklin Sylvester that he could “immortalize” his name by endowing a library. Franklin liked the idea and wanted his building to be part of Medina’s Square. He negotiated with Fremont O. Phillips to purchase the land at 210 South Broadway. Phillips lived in the 1833 David King mansion located there. Phillips sold the land but moved the mansion to its current location on the NE corner of North Broadway and East Union, today the Gowe House.

Franklin Sylvester offered the land to the Medina Library Association in 1905 along with $10,000 to construct the building that still bears his name. Dedication of the new library occurred on August 30, 1907. Sylvester stipulated that the land could never be used for anything other than a library. The library’s services were extended to most of Medina County in 1933. Despite the incredible expansion of its services, the Sylvester Library building still exists today at the heart of our county’s wonderful library district.