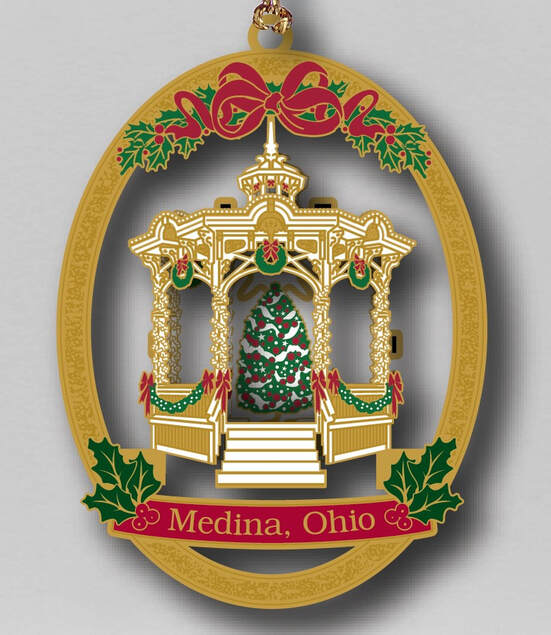 The 2.25 acres of Medina’s Public Square Park was donated in 1818 by Elijah Boardman “to be vested in the people of Medina County.” The Park, surrounded by a white-rail fence, was considered a “village green” in those days in keeping with the traditions of the early settlers arriving from New England. After the Civil War, the park’s style became more Victorian with earlier versions of bandstands, bandwagons, and gazebos gracing the park at various times. In the 1890’s, the first community fountain was installed near the center of the Park. Fountains of various styles came and went until the current design (taken from an existing 1879 gazebo in Belleville, OH) was chosen as the new centerpiece for the Park. On June 13, 1975, the new Gazebo was dedicated. Home to summer band concerts, festivals, weddings and Christmas card photos, our Gazebo has become Medina’s hometown symbol.
Also available at:
​Miss Molly's Tea Room and Gift Shop, 140 W. Washington
JK Gifts, 207 S Court Street
Medina County Convention & Visitors Bureau, 32 Public Square
Root Candle, 623 W Liberty Street

PLEASE NOTE: A $5 shipping fee per ornament will be added to your purchase at checkout.