BEYOND THE STOREFRONTS
​This project came into being through the hard work and inspiration of Robert Hyde. Mr. Hyde spent countless hours tracking down the names, addresses and dates of the businesses that occupied our fair city. Now that we have passed Medina's 200th anniversary we want not to forget the people who brought us to this point. Their struggles and successes made Medina what it is today.

Robert Hyde Presents a Tour Through the History of Medina. ENTER HERE!

Properties in the Public Square Historic District, and any other designated local landmark, must receive a Certificate of Appropriateness (COA) prior to starting ANY work that may result in any exterior change or alteration of a structure of site. A COA may be requested by a building or business owner and must be submitted to the City of Medina Community Development Director and reviewed by the City of Medina Historic Preservation Board. Download the informational brochure HERE.
​
Historic Medina's Proud Heritage
Medina is a community proud of its heritage. The Public Square and the buildings in the historic district surrounding the uptown park have been recognized as the physical, symbolic, commercial, governmental, cultural and social center of Medina since its founding nearly two centuries ago. Today, the city’s historic center defines the image of the community. Beloved by Medina’s residents, Public Square is a source of tremendous pride and it is often cited as a key reason why people choose to live in Medina.

Founded in 1818, one of the first things Medina’s earliest settlers did was to clear away the huge trees and create a public park, or, as it was called in their native New England, a Town Commons or Village Green. Business and residential buildings quickly sprang up along the four streets surrounding the park. The community received a grant of land on the condition it become the county seat for Medina County. In 1821, a fine brick building was built to house the county courts. It remains today, serving a thriving business on Public Square.

Incorporated as a village in the 1830’s, Medina  and the surrounding county grew rapidly. By 1841, a larger courthouse was needed and one was constructed on the northeast side of Public Square. While hidden beneath later expansions, the 1841 courthouse still remains as a vital part of Medina’s uptown life today. Other county, city and federal government buildings grace the area as well as historic churches, theaters and a magnificent public library building.

The Public Square we recognize today was created from tragedy. On the night of April 14, 1870, fire destroyed dozens of wooden buildings in Public Square and down South Court Street. City leaders met the next morning on the steps of the courthouse and made plans to rebuild Medina. Over the following decade, a new commercial heart, this time built of brick, rose building by building from the ashes of the past. These Victorian era commercial buildings and those that came soon after give Medina’s uptown its unique historic character.

As a crossroads of four state highways and two rail lines, Medina continued to grow in the 1900’s. By 1950, the village’s population had increased to the point where Medina could become a city. Residents adopted a charter and Medina officially became a city in 1954.

Postwar growth was in full swing and many uptown businesses and property owners were “modernizing” their buildings. By the late 1960’s the grand Victorian buildings of the 1800’s were buried beneath false fronts, boarded in windows, garish signs and all manner of unbecoming fake architectural additions. Medina’s historic charm was lost but it was waiting to be rediscovered.

In 1967, a group of Medina citizens concerned about the loss of character of the uptown area began a grassroots effort to return Public Square to its historic appearance. They formed the Community Design Committee (CDC). Working with local businesses and property owners, the CDC guided the preservation of our uptown architecture resulting in the restoration of our historic structures and the economic revitalization of Medina’s Public Square.

Today, the restored Public Square is listed on the National Register of Historic Places. It and the surrounding historic district remain the heart of the community. In the summer, Friday night band concerts are enjoyed in the Public Square Park as they have been since 1859. Throughout the year, a wide variety of activities, businesses and restaurants invite residents and visitors alike to experience Medina’s Public Square excitement and charm.

Main Street Medina is at the center of this activity and we welcome you to our historic community.

learn more about the fascinating history of Medina, Ohio, from it's founding in 1818 and its growth into a small city in 2018.
Here's a link to articles written about our rich history in celebration of our Bicentennial. 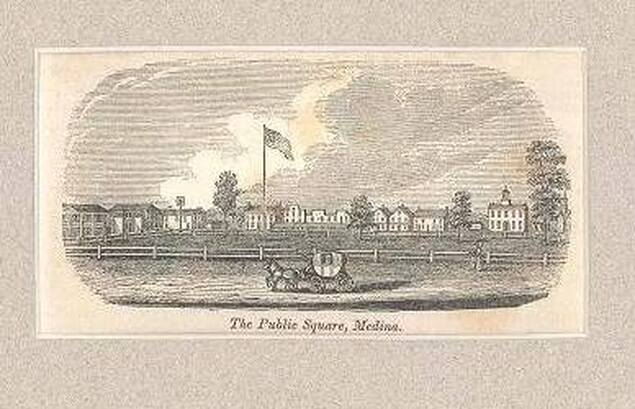